The examples can be infinite: from having the car broken down, to being in difficulty during an excursion or in places distant from people you can call, seeing animals in difficulty, having lost your pet, having to perform any action for which the strength of a person is not enough, needing a tool or equipment to solve a problem, and so on.

Let’s think about how dangerous it could be just to stay still on the highway or in a place far from inhabited centers if this happened for example in summer, with high temperatures, and perhaps having children or animals at risk of dehydration in the car. Even if someone stops, how far it should go and how long it would take to reach an inhabited place and return with water. By making a request for help, anyone who is close to a service area, a population center, and who is traveling in that direction, losing a few minutes could solve a problem that could even become very serious.

How many times have we found ourselves stuck in a situation for which a small tool, a rope, a towel, or simply two more arms would have been enough to be able to get out of it, and instead we missed a flight or an important appointment, or we simply lost hours because the only people who stopped didn’t have what we needed. If the problem occurs in an isolated place, with little passage or maybe in the evening, solving it becomes even more unlikely. 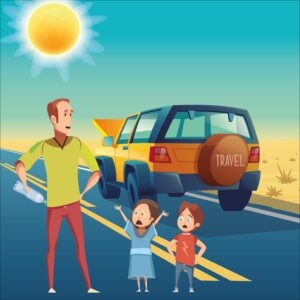