Parents who want to monitor their children during a trip, friends during an excursion, people traveling on separate vehicles, have a tool that can significantly increase safety and the ability to communicate in real time or to activate the navigator to reach a member of the same group as quickly as possible.

The function is available immediately to be able to track 2 people at a time without time limits. Every 100 points reached, the user will automatically unlock the possibility of increasing the number of participants in the group up to a maximum of 10 plus the group creator.

Subsequently, it will be possible to purchase packages in order to trace larger groups for a specified time, with the possibility of activating alarms if a user is stopped for more than a certain period, in the event of vertical fall, trespassing from a selected area, etc. .

This feature has been designed for groups of hikers, groups traveling, school groups, etc., so that the group manager or organizing body can monitor the participants, send them messages or images, and receive alarms automatically or triggered by the user himself. 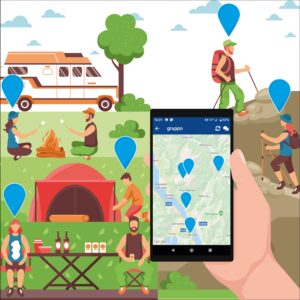